Bell, Moore & Richter, S.C. has been involved in insurance defense litigation for most of its existence.  Due to the firm’s extensive experience with all aspects of insurance litigation, we are often called on to assist insurance companies with their own defense in court.  This includes questions of whether an insurer actually has coverage for a particular claim against the insured.  Often these coverage issues may be complex or revolve around unusual fact patterns.  The attorneys at Bell, Moore & Richter, S.C. pride themselves on keeping up to date on the latest changes in insurance law and can help clients untangle the constant and confusing legislative changes in insurance requirements.

The firm has represented insurance companies as both plaintiffs and defendants in coverage cases.  Our experience also extends to the issue of bad faith litigation.  Not only have we successfully defended numerous insurers against bad faith claims from their own insureds, we have taken a proactive approach to this type of litigation.  That means protecting claims files from burdensome, and frequently premature, discovery requests from aggressive personal injury lawyers determined to harass the insurer into an unwarranted settlement.

Sometimes clients approach us before suit is filed so that we can give coverage advice that may help them avoid lawsuits.  However, our firm can provide representation for these claims at any level of the litigation process.  We have been involved in such claims in state court, federal court, and the appellate courts.  Several of the firm’s cases have even gone up to the Wisconsin Supreme Court.

Bell, Moore & Richter, S.C. is pleased to announce that Melita M. Mullen became a Director at the firm.

Ann C. Emmerich - Wisconsin Chapter of the American Board of Trial Advocates

BMR is pleased to announce that Ann Emmerich was elected into membership in the Wisconsin Chapter of the American Board of Trial Advocates. (Read more) 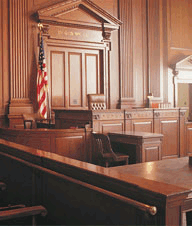